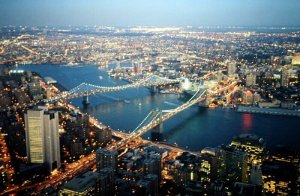 The two bridges in the foreground are the Brooklyn Bridge and Manhattan Bridge. On September 11, 2001, these bridges were converted into pedestrian bridges for a couple of days. Once the dust settled (literally), things in the city slowly returned to “normal”, whatever that means in New York City.

I normally don’t like high places, and this photo was scary for me to take. The observation deck was enclosed, but that didn’t make it any easier. For stability, I used my butt as a suction cup on the floor; I slowly slid toward the window, until I was close enough to take the photo.

As much as I hate heights, there was no way I was not going to go up there and take photos. Little did I realize at the time, it turned out to be my only chance.