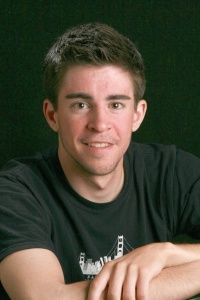 Every once in a while you have to make use of whatever is laying around. In this case, I took a portrait of Kenny in a small space in a cabin. I used the bookcase to hold a black fleece backdrop and a hairlight on a clamp. I had two lights and wanted to use the second light as a hair light to keep the top of his head from disappearing into the black background. When I took a few test shots, I noticed the right side of his face was too dark. I looked around the cabin for something to use as a white reflector to add a little bit of light to the dark side of his face. I spotted a large white styrofoam ice chest on top of the refrigerator. I used a large rubber band to attach the lid from the ice chest to the back of a chair and placed it just to Kenny’s right. See the setup photo below.
(You can click on this setup photo to open a larger one in a new window.) 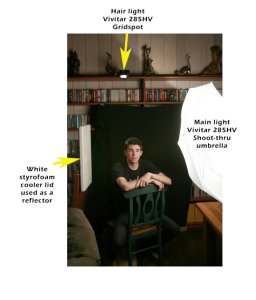 Main light: I placed a Vivitar 285 on a light stand, at camera right, with a white shoot-thru umbrella. This flash was set to 1/4 power and was placed about 3′ from him. I set the light stand on a table.
Hair light: I then used a Home Depot squeeze-clamp to mount another Vivitar 285 to the bookshelf behind and above Kenny. This flash was set at 1/16 power and had a gridspot on it to localize the light just on Kenny’s hair and right shoulder (opposite the main light).
Reflector: I attached the white styrofoam lid to a chair and placed it to Kenny’s right side.
Camera Position: I placed myself about 5′ away from Kenny.
– + –

One thought on “Portrait with two lights…..and an ice chest lid.”