California is facing serious drought issues; rainfall is significantly below annual averages. With such little rain and snow over the last 12 months, the water levels at Folsom Lake have been dropping to historic low levels. The levels are low enough to generate new nicknames for this water recreation area: “Folsom Creek” and “Folsom Pond” are a couple of examples.

I spent the afternoon checking out the new shorelines at Folsom Lake. I entered the lake area at the Browns Ravine gate. I was a bit surprised at the line of cars waiting to pay the $12 State Parks Day Use Fee. Apparently the media coverage of the low lake levels has inspired lots of like-minded visitors.

The big attraction at the Browns Ravine area is the exposure of the remnants of Mormon Island, a small town that had its heyday during the Gold Rush. Mormon Island (which is not an island) was covered up with water when the Folsom Dam was completed in 1955. The low water levels have given unusual access to amateur archeologists to poke around some of the ruins.

Mormon Island is about a 1.5 mile walk from the parking area. The area was pretty crowded with families, dogs, strollers and mountain bikes. The pilgrimage out to the ruins was a bit surreal; it reminded me of a spiritual migration. Some building foundations were still visible, along with the remnants of an old access road. Apparently, the main part of the town is still under water, farther out from the dry sections.

After spending some time near the ruins, I drove around to the other side of Folsom Dam to the Beals Point area. (The Day Use Fee allows access to all areas of Folsom Lake on the same day.) Beals Point features a campground and beach area. Well, a beach area when there’s water around. Not this year, though.

The Beals Point area was very quiet with very few people. The terrain was different from Browns Ravine, almost lunar-like in places. Most interesting to me was the view of the Folsom Dam. It was eerie to see how low the water level was on the wet side of the dam, exposing parts of the structure not normally visible. It felt rather dystopian, like I was  wandering around after a massive catastrophe.

I remembered a visit to Folsom Dam in the mid-1970’s when several of us photographers were given an inside tour of Folsom Dam. Since this was pre-9/11, access was much more generous. I’m sure now it would be considered a national security risk to allow people to wander around the bowels of a dam and take photographs.

We had visited the control room, walked around the inside and outside of the generating building and had access to the inside of the dam structure. One of the generating turbines was shut down for maintenance and we were allowed to walk around the inside of the water tube. One of the dam workers thought it would be funny to drop a large piece of lumber inside the tube. The explosive sound and persistent echo was startling. Even though the tube was dry, I think some of us left some moisture behind. He was the only guy laughing, if I recall correctly. Dam worker.

If the water levels continue to drop, I plan to revisit the area and take more photos. As more parts of the dam are exposed, we will have the opportunity to see things that were never expected to be visible again.

My last post of fall colors in my neighborhood reminded me to share some test shots I took –  I wanted to illustrate how much difference a polarizing filter can make on the colors in a landscape photograph.

Why the difference? A polarizing filter removes polarized light – the degree of removal is based on the angle of the camera and the rotation of the filter. The filter is actually two filters that rotate independently. By rotating the outer filter (the inner one is firmly attached to the front of your lens) you can vary the effect. Any reflections on non-metallic objects are polarized light and the filter can reduce the reflections.

The images below show a close-up example of the differences in color saturation. The photo on the left (no polarizer) gives you an idea of the amount of reflection on the leaves. When the polarizing filter is rotated (photo on the right) the reflections are reduced and you get the true colors of the leaves.

Sunlight is also polarized light, so when you use a polarizing filter, it can make the blue sky seem darker and more dramatic. The effect is most pronounced when you are pointing the camera about 90 degrees from the direction of the sunlight.

Be sure to get a circular polarizing filter (most of them these days are circular). A linear polarizer won’t work well with auto-focus systems and digital sensors. A good polarizing filter can be pretty expensive ($40-$50) and if you have several lenses with different filter sizes, the best approach is to buy a filter for the largest size, and get inexpensive step-up rings to adapt the large filter to smaller lens diameters. In this way, you can use one filter on all lenses.

I went the Bay Area last week and took a ferry ride over to San Francisco for a few hours. This also gave me a chance to try out a recent used camera purchase. Combined with sunny weather, it was a great day.

The ferry leaves Larkspur and crosses San Francisco Bay to the San Francisco Ferry Building along the Embarcadero. I was lucky enough to catch the high-speed ferry (30 minute ride vs. 45 minutes on the slower one). It really flew along the water. I’m guessing we were moving about 50 mph land speed, based on how hard the wind hit me in the face.

This was my first time on a ferry on the Bay and it really gives a nice vantage point along the way. We passed San Quentin Prison, Angel Island, got a great view of the Golden Gate Bridge and Alcatraz Island, and the approach to the SF city from bayside was terrific.

Once I landed in the City, I walked around the Embarcadero area. I ventured into the Hyatt Regency Hotel with its famous atrium interior. I took a photo from this vantage point around 1980, it may be on my website.

I had lunch with my son, Ken, who works about a block away. It’s always fun to see my grown kids out in their own world – I realize Ken has lived more than 1/3 of his life in San Francisco. We had a great visit and it was, as always, way too short. I bopped around a little more, bought a baseball cap from the SF Giants Dugout Store (naturally), and headed back to the ferry landing for the return ride back across the bay.

I took a quiet drive along the Sacramento River toward the delta region last week. It’s mostly farmland in this area…pear orchards, new vineyards, grain fields.

Locke is a small historic riverfront town about 20 miles south of Sacramento. In fact, it is very small. The main street (above) runs about one block, and it looks like there are a couple of streets with small houses on them. Locke has an interesting history. It was formed in the early 1900’s by a group of Chinese residents who wanted to form their own community in the farming region.  It has the unique status as the only town in the United States built exclusively by the Chinese for the Chinese. A few small businesses still operate along the main street: a bar called Al the Wop’s, some gift shops and a small market. There is also a small Chinese memorial park monument.

Recently I took a drive to the Napa Valley area to photograph fall colors in the vineyards. These two gentlemen were relaxing in Calistoga, sitting along the main street. They were quite willing to be photographed, although they may look a little apprehensive here. This image was taken late in the evening, it was much darker than it appears. Gotta love the new 5D Mk II and its low light resolution. 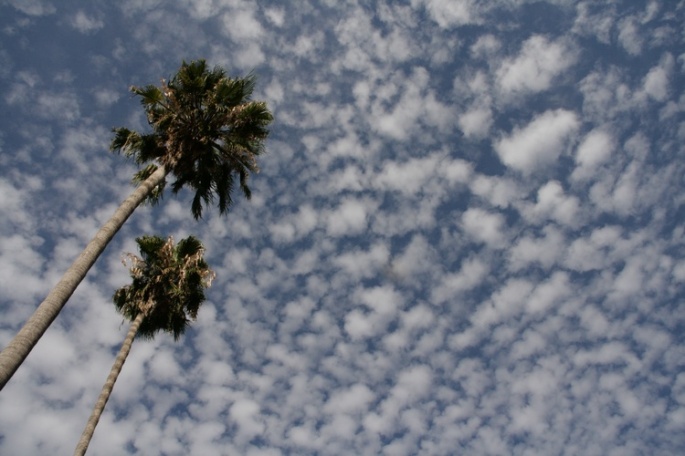 On some days it pays to take a nice long walk. The other day was one of those days.  I always love to see a great sky overhead, it makes everything else look much more interesting.

After the Sacramento Rivercats game ended on Friday night, they had a pretty nice fireworks display at Raley Field. This was taken from across the Sacramento River along the promenade. I included one of the towers of the Tower Bridge because I wanted a stationary and recognizable object in the image in order to provide some scale to the fireworks.

Fireworks photos are pretty easy, if you can control the shutter speed of your camera. For a time exposure, a sturdy tripod is essential to keep the camera from moving during the exposure. I used a 10 second time exposure for this shot – I also set the lens at f/22 (ISO 200). This gave me a good base exposure for the bridge. I just locked the shutter open while a few fireworks bursts went off. It’s hit or miss, sometimes you’ll get a lot of bursts (and sometimes more is not better), other times, there won’t be very many bursts.

A mature bald eagle soars overhead. This was taken while standing on the dam at Meadow Lake in the Sierra Nevada mountains.

The water in Squaw Creek moves smoothly during this still warm evening. The only thing faster than the water was the mosquitos.

I kept the shutter open for three seconds to create the silky smooth look of the rushing water. 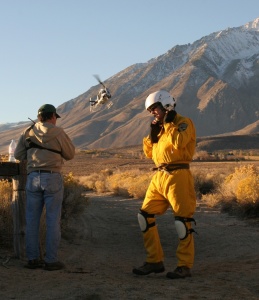 This crew member prepares for boarding of the helicopter in the background.